You might think that counting to seven is a simple and straightforward task, something which you’d be capable of in almost any situation and most, if not all, circumstances. I, once, was like you.

However:
In the last week, I’ve needed to count to seven on around thirty or forty occasions – while adding scoops of formula into a bottle – and think I’ve managed to do it, and being absolutely sure I’ve got it right, about half the time. The rest is anyone’s guess. I’d be pretty sure they were all one either side of seven. Given that he’s both a little chubby chops and a bottomless pit, I can only assume it’s ending up about right. Either that or I’m managing to feed him both too much and too little at the same time.

A number of other useful life skills have packed up and pissed off in the last week, presumably thanks to the heady combination of sleep depravation and spending my days with someone who communicates solely in grunts, cries, chuckles, and using his fingernails to lacerate your face:

They’re just the day-to-day faculties I’ve lost. In terms of actual possessions, I’ve actually lost my actual wallet, containing all my actual bank cards, my actual driving licence, my actual Nectar card, my actual Tesco Clubcard, my actual My Waitrose card, my actual AA membership card (Relay, Home-Start and Stay Mobile cover – a small price to pay for a great big piece of mind when you drive a ten year old Italian hatchback), and two slightly used books of actual Royal Mail stamps. Plus some receipts for some stuff. And an EE SIM card I use at Glastonbury.

I last had my actual wallet on Thursday afternoon at Big Tesco in Edmonton (the one next to Ikea) where I stocked up on a wide range of groceries (formula, some Ella’s, nappies, nappy bags, baby wipes, Calpol, some bottle teats, a bottle scrubbing brush, a pack of muslins, a bunch of bananas) and then, buoyed by my success, decided it would be a good idea to take my infant son to soft play. I took a photo of my infant son looking unimpressed at being in a ball pool (while trying to work out how to eat one of the balls) and another of him crying in a Little Tikes fire engine. Dad of the year. 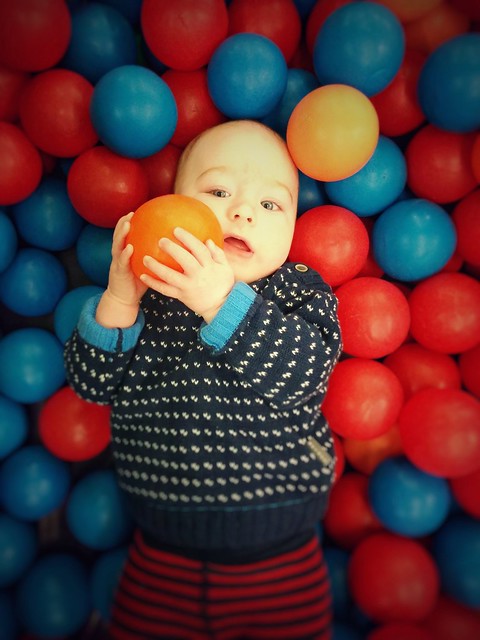 Anyway. It is all very well larking about in a ball pool with your infant, occasionally tearful, son on a Thursday afternoon when you and your mate Lynne have got the place to yourselves. It is quite another thing to return on a very busy Friday morning, without your infant son (who I needed to guard the car because, you know, traffic wardens) or mate Lynne, and start feeling every square inch of the ball pool floor as part of the eternal search for something that’s forever out of reach. Top tip: if you are a lone adult male who has legitimate reason to enter a children’s soft play area for a good rummage, you might want to explain yourself to at least one of the mums. On the upside, I did find a bit of a Tracker bar and the centre manager was, eventually, most understanding. Then we went home (no parking ticket, well done son) and I rang all the banks and supermarkets and asked them to send me new cards, please. “Certainly, Mr. Jeffery. Can I just take the second and seventh letters from your telephone banking password?”